When we talk about India, we never forgets to mention the heartwarming aroma and finger licking taste of Indian food. A country with thousands years of history always associated with wide variety of dishes too.

Rumali Roti, a tasty Indian bread, which once decorated the Mughal Empire dining table, and still rules the hearts of foodies. The thinnest, softest and the longest bread made out of Maida (usually) has changed its face from being a normal rotti. In this century, food lovers and food explorers gave Rumali Rotti a new face.

In the ancient times roti was served along with Rice meals. As the technology up gradation and globalization lead foodies to change their usual way of having meals. Now a days people are absolutely fine with the new experiments in food and beverages. Trying our desi dishes along with the Arabian or European style is now common in our Indian streets. Before, in our Indian dining we all were believed in a food discipline. But that era has been changed. People choose to be different in each time they have food. From morning to night, people are ready to challenge their taste buds.

A snack food trend began to rule the food lovers hearts. It’s more comfortable to carry and the mouth-watering taste made people to select snack foods all the time. Sandwiches, Meat rolls,  etc… was on the top of every list. Now Rumali Roti also found its space. Shavarma rolls now use Rumali Roti.

And another Arabian food Falafil, which is filled with lots of veggies and healthy dry fillings uses the proud rumali roti.

Rumali Roti has been a part of our history and lifestyle. We know that no machine can create the taste of a handmade rumali roti. So our roti is 100% handmade. From making dough to roasting no machines are used. When food is made with our hands we add love and care too. As a mother prepare food for the child, we are that careful while serving you. Quality of the rotti is assured. A clean and tidy working environment assures the quality.

Along with love, we add Maida, Milk, Egg, Banana, Sugar, Salt, Butter and Sunflower oil for the perfect tasty rumali roti. The oil content in rotti is very less. So you can eat until your heart is full. The roti is really soft and thin, so you don’t have to be worried about the digestion. Health is wealth, So no harmful content or ingredients added in roti.

Your satisfaction is our reward. 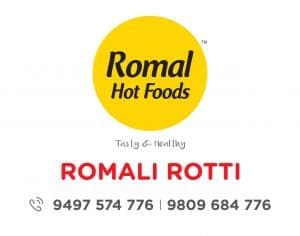